For the American photographer Edward Weston (1886–1958), ‘to consult rules of composition before making a picture is a little like consulting the law of gravity before going for a walk’(Weston, 1930, p.320). Yet Harold Evans (b.1928), the legendary picture editor of the Sunday Times, stressed the importance of technique: ‘In writing, the injunction is to have something to say and to say it well, and in photography, similarly, the idea needs to be served by technique’ (Evans, 1997, p.88).

In practical terms, we can begin by simplifying composition to the fundamental elements of point, line and frame.

In the 1920’s a founder of a group of phycologists’, Max Wertheimer developed a group of theories of visual perception. This was referred to as The Gestalt principles. The principles attempted to describe how people perceive and process visual information.

Gestalt is a German/Austrian word for ‘form’, ‘shape’ or ‘the whole.’

The science behind the Gestalt studies that there is a relationship between the human eye and the brain. Alfred Yarbus, was a Russian psychologist who studied eye movements in the 1950’s and 1960’s.

If the principles are applied and the composition of the image captures established patterns, lines, light shafts or light shading for example then the eye to brain function makes them much more powerful and absorbing.

Take a number of shots using lines to create a sense of depth. Shooting with a wide- angle lens (zooming out) strengthens a diagonal line by giving it more length within the frame. The effect is dramatically accentuated if you choose a viewpoint close to the line.

I approached this exercise using a D610 and wide angle 16-35mm lens and Tamron 70-300mm lens. The settings were all manual due to the fact I prefer to control the settings.

I found several opporunties to use several lenses both wide angle and zoom to explore the differences in each and changing f-stops. I used several locations in order to compare both landscape, urban and structure to see if there was a greater or lesser degree to which lines strengthened or weakend an image.

Review your shots from both parts of Exercise 1.3.

How do the different lines relate to the frame?

There’s an important difference from the point exercises: a line can leave the frame. For perpendicular lines this doesn’t seem to disrupt the composition too much, but for perspective lines the eye travels quickly along the diagonal and straight out of the picture. It feels uncomfortable because the eye seems to have no way back into the picture except the point that it started from. So for photographs containing strong perspective lines or ‘leading lines’, it’s important that they lead somewhere within the frame.

This in my opinion is the ‘classic’ leading line and no matter where I’d placed the tracks e.g. left, central, right the eye is lead along the track to the end where it doesn’t end abruptly and the eye follows to the buildings and away. 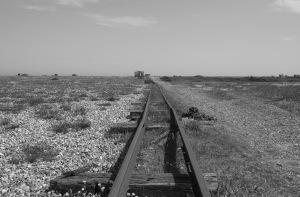 The ploughed field grabbed my attention as I drove along the quite country lane. Whilst the furrows and the added benefit of the black and white enforce the contrast and strengthen it I feel that it comes to halt at the horizon, which is rather disappointing. 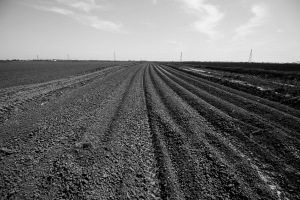 How do the different lines relate to the frame?

The underground car park offered ample opportunities for lines both vertical and parallel lines drawing the eye into the image.

The lines in these particular images lead the eye in the most to a point and the strongest of these being the image below. The iron girders create a strong emphasis and doesn’t disrupt the composition either using wide angles or zoomed.

Wide angles certainly have the best impact and I’m pleased with my decision to take photographs at different locations to enable a comparison.

The car park in the wide angle gives a sense of wide space enforced by the white painted arrows drawing the eye further along until the open space beyond gives a ‘hint’ of the landscape.

The zoom at 300mm from the same viewpoint although works to some extent even thought the image is cropped forming the ‘L’ shape it stops suddenly obstructed by the car and further onto the wall. 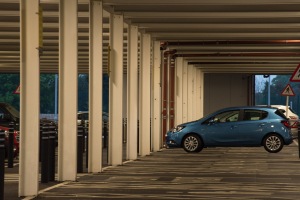 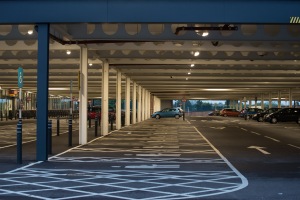 Take a number of shots using lines to flatten the pictorial space. To avoid the effects of perspective, the sensor/film plane should be parallel to the subject and you may like to try a high viewpoint (i.e. looking down). Modern architecture offers strong lines and dynamic diagonals, and zooming in can help to create simpler, more abstract compositions.

By far the strongest image is the wood and metal and I would agree with the statement that modern architecture offers strong lines and angles.

The old railway tracks demonstrate that once the eye follows the line and leaves the edge there is no way back to a point of focus. 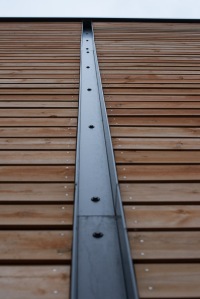 The photographer may decide that the frame contains elements, which may not have been intended to be part of the image be that parts of buildings, people or shapes that do not connect to each other.

Cropping provides infinite possibilities if the composition is good enough almost like rolling out a roll of wallpaper and the pattern extends across being able to cut it without interrupting it.

Contrary to cropping framing is rather like looking through a window and allowing the photographer to select the most important parts of the subject that he intends the viewer to focus on. There is no ability to crop the subject later and eliminate that which doesn’t add or detract from the photograph. Framing really is all about focusing and concentrating one thing.

“If the photographer’s frame surrounded two figures, isolating them from the crowd in which they stood, it created a relationship between those two figures that had not existed before. The central act of photography, the act of choosing and eliminating, forces a concentration on the picture edge—the line that separates in from out—and on the shapes that are created by it.” (‘John Szarkowski, The Photographer’s Eye’, no date)

Walker Evans seemed to be a bit of a rebel although it is claimed he broke new ground and made new roads in photography. Evans cropped and trimmed negatives to fill the whole frame almost edge to edge to exaggerate the lines of an object framing it almost full-length this would greatly enlarge it.

John Szarkowski, The Photographer’s Eye (no date). Available at: http://www.jnevins.com/szarkowskireading.htm (Accessed: 16 May 2016).