Last week I met with my new non-medical helper Ian and had two very successful and productive days. I was able to gain sufficient material to complete outstanding exercises in line and frame.

The best place for this and nearest city is Canterbury. Canterbury is a very busy tourist city with various attractions where crowds congregate. There is a very busy shopping Centre, which is private property. I visited a shopping Centre the previous evening in Thanet where I intended to take photographs of a brushed metallic seating area which would have been perfect for the exercise in lines. However, I was shouted at over the tannoy system by the on-site security he told me to stop photographing and to report to the management suite. My previous role as a police officer I am all too aware of the sensitivity of photographing iconic locations, sensitive buildings and legislation governing the terrorism act. I was quite surprised that I was stopped before it even started to photograph the structure. I firmly believe that this was due in part to my placement of a tripod. I spoke to the staff who seemed rather vague on why I was unable to photograph and the location. I explained the reason for the visit and the purpose of the photography but this made little difference even after having explained the terrorism act to the security guard and the difference between public and private property. At that point he told me that the site was private property and I tactfully withdrew and was unable to take the images and I wanted.

Bearing that in mind when I went to Canterbury I was very aware of my placement of tripod and camera and which areas I was standing in. Canterbury being the hectic place that it is and the volume of cameras being used or carried I didn’t look out of place. My first place to visit was outside the entrance to Canterbury Cathedral. This is a public area surrounded by High Street chain stores, coffee shops and food outlets. In the Centre of the square is a memorial statue. I decided that I would need to use a tripod not only to assist with the slow exposures to avoid camera shake but also so that I could minimize my fatigue.

It was a really busy and I was able to place myself towards the edge of the square without causing an obstruction yet able to observe all I visited Canterbury the intention of visiting several locations or Project Two – Collecting. The choice of topics in the brief our crowds, views, heads. I decided that I would approach this with my own topic of motion and exploring various techniques that I’ve employed myself in my personal photography over the last 12 months and combine the knowledge I gained on the previous such assignment and exercisesof the groups, members of the public and people waiting to enter the cathedral. It was almost like watching the flow and ebb of a tide as the people came and went with pauses in between.

I experimented initially after taking light meter readings and settled on an exposure with a six stop Lee filter. The sunlight was very bright and the shutter speeds that I wanted to use just resulted in over exposure.

I thought back to my previous exercises and research around eye movement and how lines can lead the viewer around the scene without leaving it. My first image on reviewing it in Light room was better than I expected I was fortunate the cyclist entering the frame on the left-hand side immediately drew the eye around a group sitting on the floor with the backs against railings surrounding the statue. Although the scene did not have any blurring and was exposed correctly it still works because of the cyclist. 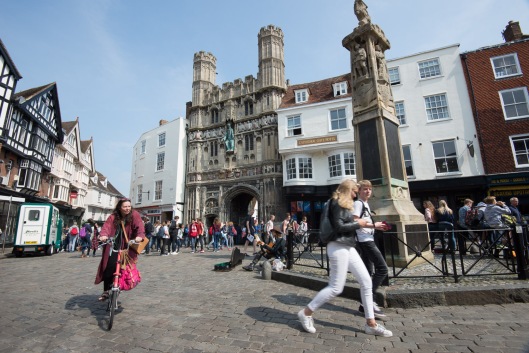 I wanted to capture and create a feeling of movement around static objects and I thought the best way to achieve this was probably to focus on feet and legs rather than the whole body or the heads. Lowering the tripod to almost floor level meant I was able to show the movement of people by the shadows left behind as they momentarily stood and walked away.

Also thought about how the tension between groups can be created when one individual is moving or looking in the opposite direction to the rest. Again I was fortunate to encounter this several times.

I moved to another location, which was in the High Street the natural flow of traffic could only go perpendicular to where I was able to stand. The bright sunny afternoon shadows were created on the pavement by people walking. I tried to capture this as best I could and it seemed to add a sense of warmth to the picture even in black-and-white because of the shadows on the pavement and clothing worn. I didn’t think too much about where I stood other than of wasn’t facing or looking into any banks, shops or anything well could have been challenged over the photography. I saw an empty and focused on it. It had been covered on the inside by brown paper leaving only the signwriting on the windows and the doors. This time I decided that all I would do is just change the shutter speed and randomly take photographs but at the same time I was conscious I wouldn’t photograph children in pushchairs or with parents and restricted this only to adults. The reason for this being obvious and if anyone asked if I’d photographed them without consent I would be able to show that nothing would identify them as they were blurred. No one looked at me or what I was doing but I wasn’t surprised due to the pace of people rushing from one place to the other. I made a conscious effort not to review the photographs that I’d taken but to wait until I got home and was able to import them into Lightroom.

On my way to the final stop I found some street entertainers and this provided the ideal opportunity to change lenses and use my Lomography Petzval. The entertainers were performing a statue one placed on top of the other (creating the illusion) and as the backdrop was ideal the lens suited this shot. The petzval uses waterhouse slides for the aperature setting and the lens is manual. The D610 or D7100 recognise it and is a non-CPU lens this means that my reading for light are totally dependent on the use of light meter. The effect created it a soft focus due to the shallow depth of field and the swirl created by the lens.

Waker Evans, was less interested in photographin people and interested in the urban landscape. Signage, advertising and posters were just as important then in the 1930’s as they are now with the subliminal messages and suggestive thoughts. When I came back home and carried on my research into the Exercise Lines 1.3 did this connect when I looked back at the images I’d taken that day. I think this image proves that wether or not I intended to include the phone box and the posters in my composition I’m not sure that I made a conscious decision but without it the image is weak. Perhaps subconsciously I included them in the frame because of the conditioning we are all exposed to. 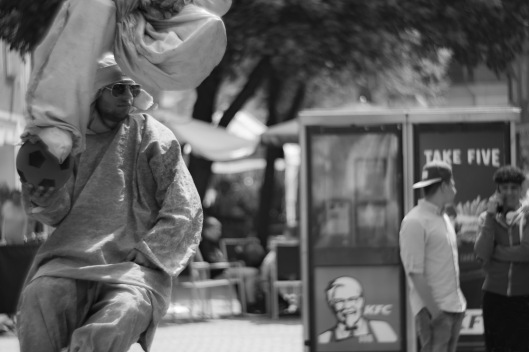 I moved to a third and final location on the city wall in the north of the town. I wanted to be able to be elevated above vehicles and pedestrians. I thought back to exercise 1.3 lines when looking parallel down onto lines and how this would work or not work with vehicles and pedestrians leaving the scene and slowing the motion to give a sense of speed and time passing. once I’d felt that I had enough images I moved again to an underpass across the road.

I used a wide-angle lens I leant over the railings and I was able to point directly down so as to cover the entrance/exit of the underpass and into the ramp area. I did review the images at the time I was quite surprised at how almost everyone used the underpass as they turned into or out of almost stuck themselves to the inside corner of the walkway.

I think this was probably the most interesting practical day that I’d had since beginning the course probably in part due to the fact that Ian was able to carry my equipment allow me to focus on the photography rather than becoming so tired that I would’ve probably not achieved half but I would have done that day.

The following day I’d arranged to meet Ian at the Chatham historic dockyard’s. I intended to complete some of the exercises in 2.1 to 2-.7 unfortunately the location did not particularly have anything I could use or I felt that I could use these exercises and in some ways was just as busy as Canterbury have been with groups visiting. Deciding to change the intentions of the day I went back to taking photographs for the collecting project. This proved more difficult than I thought primarily due to the groups move rather quickly from one location to the other. Although the exhibits themselves are static e.g. submarine, sailing ship and battleship became clear to me I wouldn’t get what I wanted and I was somewhat disappointed. Perhaps this is something I’ll have to take into account before I go out in the future. I don’t think I will revisit Chatham dockyards just doesn’t simply have the material I want one looking for.

I had a busy week all in all with a mixture of coursework and hospital visits and by Friday I was exhausted. Think I’m going to need pace this course and plan for more than I’d realised purely because of the Kennedy’s disease and the physical effort required. I’ve also met my new specialist mentor on Friday evening and she was able to give me some good advice looking forward to working with her. She’s encouraged me to write this entry in my blog and to treat my blog as a diary entry system. I find the research element quite challenging and a little frustrating. I think this is just because I’m not used to researching and this is a whole new way of learning and finding my way around the OC website quite daunting and at times confusing. During my discussion with Sue, the specialist mentor that I work better with physical objects rather than reading from the internet or using software to create mind maps. I’m a hands on person but then I knew that and have been most of my life and that reflects in the jobs I’ve been employed in.